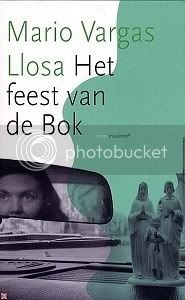 Mario Vargas Llosa – The feast of the goat

Vargas Llosa wrote many beautiful books, some of which I had read when I discovered this volume. A story about a country I learned to like a lot, that has been very important for me, written by an author I love to read. Try to find a better combination.

The goat in the title is Rafael Leonidas Trujillo, dictator in the Dominican Republic from 1930 ‘til 1961. His nickname likely stems from his many sexual escapades, preferably with (very) young girls.

Three storylines make up the novel. The story of the dictator himself, the daily business in and around the palace, in the local prisons, the parties, the girls, his staff and the politicians surrounding him. The second point of view in the book is a group of dissidents with a plan to kill the evil dictator. Their preparations and especially the last hours before the murder are well lit in this book.

Finally there is the story about Urania Cabral. Her father was a minister, she grew up surrounded by many people who never saw or didn’t want to see the evil schemes a country living under a dictator inevitably has. We follow her, years later, for the first time back in her native country after years in exile in the United States. This storyline is responsible for the title ‘novel’ on the cover of this book. She is the fictional character, it is because of her looking back in time that the reader gets to know what an animal the dictator actually is.

Vargas Llosa manages well to mingle the three story lines. He draws you in, bit by bit, which means that halfway into the book, you (the reader) must have an idea what will happen next, how it will all end, but mainly you’re so curious you want to continue reading. To me, that is a sign that a book must be well written, the author manages to drag you straight in.

Given my background, ten months in the Dominican Republic at the end of my study, this book is certainly recommended. A few aspects had my extra attention. The sisters Mirabal obviously appear in this novel. Any story about the resistance in Santo Domingo cannot ignore their role. In this book their role is small though, not more than a mere mention. Then again I had already read a children’s book while I lived there and later the brilliant ‘In the time of the butterflies’ by Julia Alvarez.

But the best supporting role to me has to be Joaquin Balaguer. Prime minister under dictator Trujillo, president after he died. Not only that. Over thirty years later, on my first entry into the country, he is back into power. Without any doubt he is the most important politician in the country during the last century. Not the dictator, but the man who lived to be a politician and was beyond ninety when he died, still in a support role for the current president, turned out to be the most historical figure in this book.

Vargas Llosa has written a beautiful book about a country that for many remains only known as a holiday destination. Somewhere in the Caribbean whit many luxury All Inclusive Resorts near fabulous beaches. Where everybody always seems to be optimistic, where life is always fun.

Unfortunately life wasn’t always fun, this book certainly proves that. Better than an ordinary history book, more catchy than a nivel, this book is recommended for anyone who likes to read about politics, who likes thrillers, good stories, true stories, history, basically anybody eager for a good book.

Quote: “When I see a beauty, a real woman, a woman who manages to get into your head, I don’t think about myself. I think of the Boss. Certainly, about him. Would he like to hold her on his arms, would he want to make love to her? I have never told this to anyone else. Not even to the Boss himself. But I’m sure he knows. He knows that he is my first thought, even when it gets to that area. And let me make one thing clear, I adore women, Agustin”

Much more via WikiPedia
Collapse